The EqualVoice initiative launched by Ringier last year aims to improve the visibility of women in media coverage, with the EqualVoice factor measuring how often women are mentioned in Ringer media articles. An initial assessment indicates that the visibility of women in publications from Ringier and Ringier Axel Springer Switzerland is developing positively. The biggest increase has been in Handelszeitung, with the proportion of women mentioned in reporting increasing from 17% to 24%.

Instead of promoting quotas, Ringier is using its journalistic and technological influence to advocate gender equality. The publisher has developed a semantic algorithm to measure the visibility of women in online articles published by Ringier and Ringier Axel Springer Switzerland. This provides two objective indicators – the ‘Teaser Score’, which evaluates the visibility of women in images, headlines and titles, and the ‘Body Score’, which shows how often women and men are mentioned in an article's text. The online content of Blick, Beobachter, Bilanz, cash, GaultMillau, Handelszeitung and Schweizer Illustrierte has been studied. Figures from 2018 onwards are available for most titles, enabling developments to be viewed over time.

‘We are delighted to see how EqualVoice is put into practice in our editorial offices, and that the visibility of women in the publications has significantly improved. We will continue to work on this,’ says Annabella Bassler, CFO of Ringier and creator of the EqualVoice initiative.

Women are referred to increasingly in all the titles studied, with the rise in articles lying between 1 percentage point (Blick) and 7 percentage points (Handelszeitung).

The Teaser Score is relatively constant, with the biggest increase of 5 percentage points on the previous year shown by Handelszeitung.

Going beyond quantitative measurement, many editorial offices have taken individual measures and initiated more extensive studies. An internal analysis at Beobachter revealed a gender imbalance in certain sections, while Schweizer Illustrierte focused on perceived details in language and images, and compiled a set of guidelines on this basis. All editorial offices have created project teams responsible for implementation of EqualVoice in day-to-day work. At Blick, EqualVoice is also applied in critique sessions, which are regularly held exclusively for the initiative. 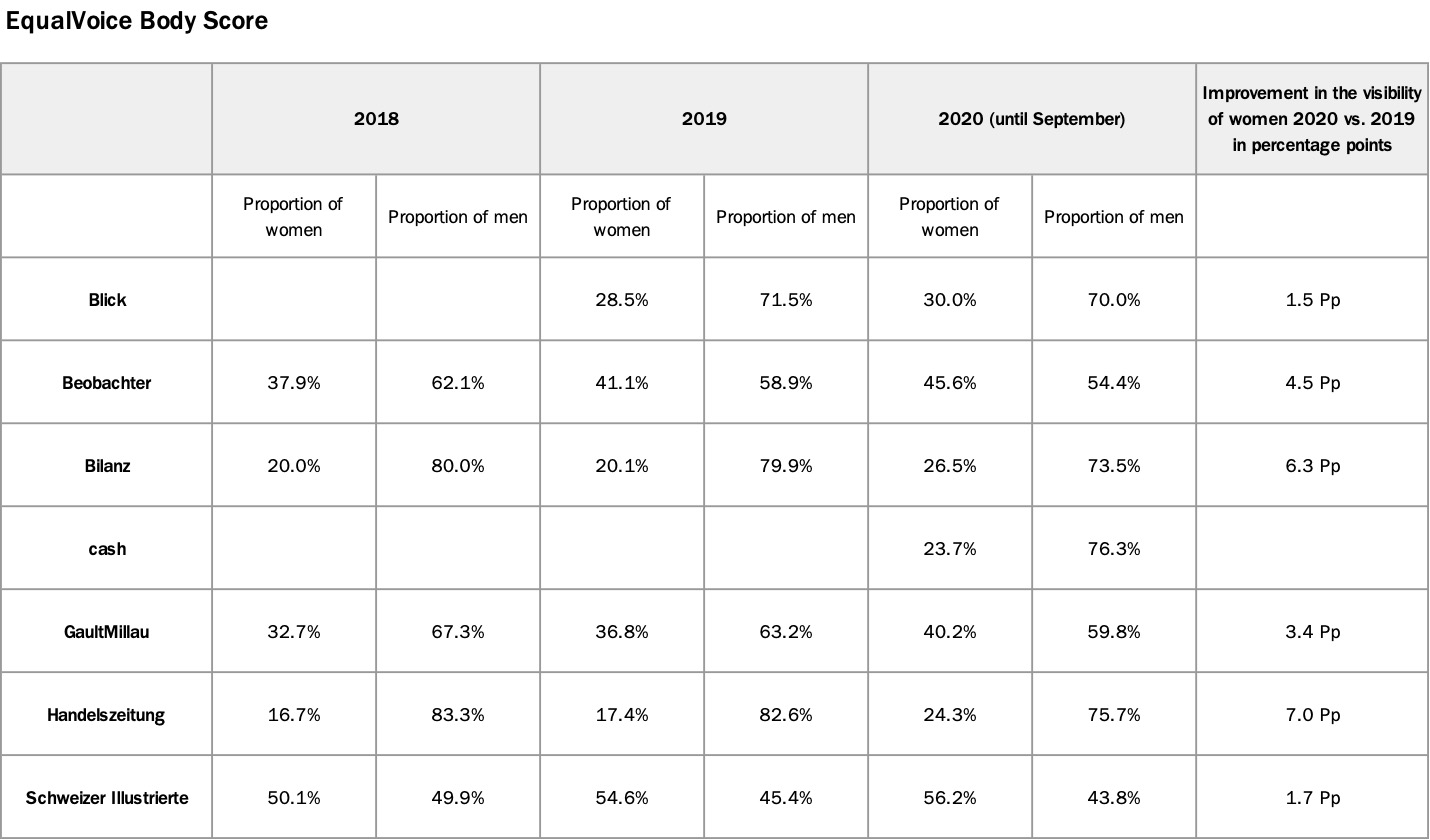 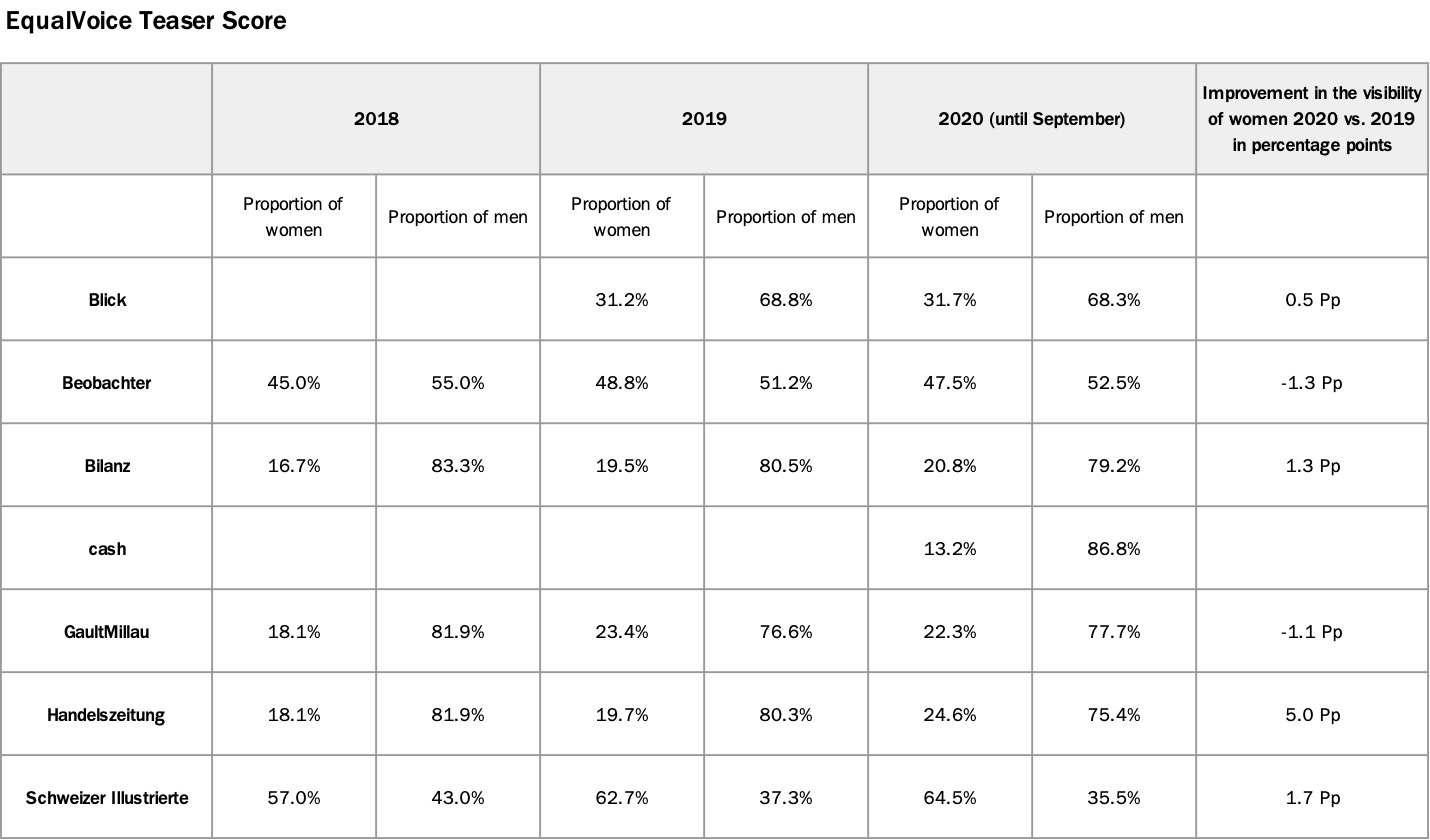 The initiative was launched by CFO Annabella Bassler in November 2019, and is chaired by publisher Michael Ringier and CEO Marc Walder. Its aim is to advocate gender equality and improve the visibility of women in the media. The central element of the initiative is an indicator known as the EqualVoice factor. Further projects related to EqualVoice include the Female Experts List, Ringier’s internal tool for finding female experts, the EqualPyx photo challenge, aimed at generating images with more diversity, and the female experts workshop ‘Get Ready - Go Forward’, which supports women in making the most of their expertise. An international expansion of the EqualVoice factor to include other media brands is planned for the near future.

The following renowned personalities have been recruited to the Advisory Board since the launch of EqualVoice: Simona Scarpaleggia (CEO of EDGE), David Allemann (CEO and co-founder of On), Pascale Baeriswyl (diplomat and head of the Permanent Mission of Switzerland to the United Nations), Yann Borgstedt (entrepreneur and founder of the Womanity Foundation), Nicole Burth (former CEO of Adecco Switzerland), Ingrid Deltenre (media manager and board member), Christiane zu Salm (media entrepreneur and advisor), Franziska Tschudi Sauber (CEO of Weidmann Holding AG), Tanja Grandits (Michelin-starred chef and GaultMillau Switzerland’s ‘Chef of the Year 2020 ’), Carolina Müller-Möhl (President of the Müller-Möhl Foundation) and Dr Sabine Keller-Busse (Group Chief Operating Officer and President of UBS Europe, Middle East and Africa).